Since South Africa is located at the southernmost tip of the African continent, you can go diving in both the Atlantic and the Indian Ocean during your stay here. The region off the South African coast where the two seas meet is truly magnificent and teeming with marine life.

A world-famous sardine run takes place off the coast of South Africa each year between May and July. This is when billions of Sardinops sagax come to spawn off Agulhas Bank and then leave for the eastern seabord. Diving among the sardines is truly spectacular. Imagine a school that is 5+ km long by 1.5+ km wide and 30 metres deep. Naturally, hungry predators follow these schools and you might find yourself in the midst of sharks and dolphins.

False Bay is a popular dive among visitors staying in Cape Town, since it’s nearby. Also, the water in False Bay tends to be warmer than on the Atlantic side of the country. False Bay have a sandy bottom with large kelp forests. There are also some rocky walls with nudibranchs, sea fans and feather stars. 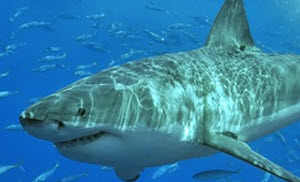 If you want to encounter Great Whites, Gansabaii and Mosselbaii are two good destinations. The most intense white shark season is April – September. These two dive spots are also frequented by other large marine creatures, including dolphins and Jackass penguins.

At the northern corner of Mosselbaii, you’ll find Santos Reef. This is a small and well-sheltered reef where you don’t have to worry about incoming swell. The visibility is usually best during the summer season.

In June – September, Spotted ragged-tooths congregate at off the coast of South Africa to mate. A popular dive spot for divers interested in these fascinating sharks is Aliwal Shoal between Durban and Port Shepstone.

Please note that the visibility at Aliwal Shoal can vary greatly, from a nice 40 metres to a mere 5 metres.

Protea Banks is a reef system located approximately 8 km from Shelly Beach. Large schools of Barracuda, Tuna, Kingfish, and Yellowtail can be seen here. Of course, large schools like that also attract big predators, such as Bull sharks (Zambezi), Hammerheads, Ragged-tooths and Tiger sharks. Please note that some parts of the year are better than others if you want to see sharks. The Tiger sharks are for instance more likely to be here if you go diving in February – May, while Ragged-tooths show up for the May – November season. The best season for Humpback whales is June – September.

Diving at Protea Banks will typically entail going down to a depth of 30 metres and then allow yourself to drift with the current. Your dive operator will then pick you up at a pre-specified spot; you don’t have to fight the current to get back to the spot where you descended. Protea Banks is absolutely not recommended for inexperienced scuba divers.