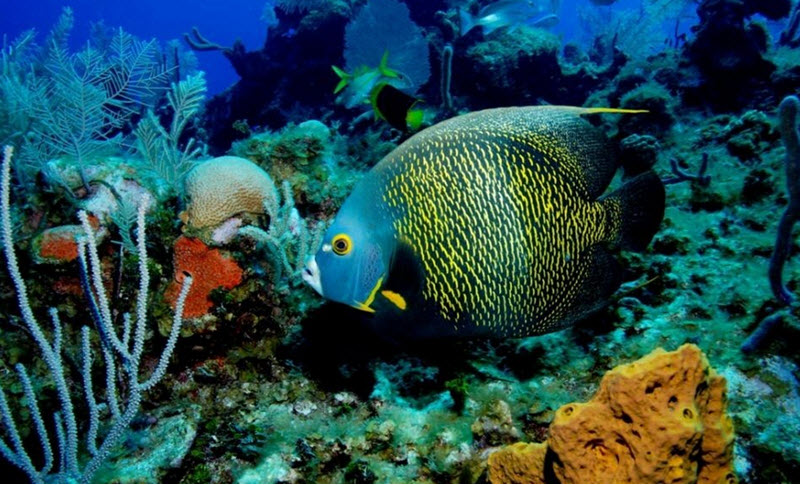 The Cayman Islands is primarely known as a tax haven and offshore banking centre.  But it is not just shady businessmen, people who want to avoid tax and financial insitutions such as digital options broker that are attracted to the islands.  The islands is also popular among scuba divers due to the warm waters and the fantastic diving that you can find around the islands.  The cayman islands offer world class diving.

Cayman Islands in the British West Indies consists of three islands: Grand Cayman, Little Cayman and Cayman Brac. Located in the warm waters of the western Caribbean – south of Cuba and east of Yucatan, Mexico – the Cayman Islands offer good dividing opportunities year round (outside the hurricane season).

Grand Cayman, Cayman Brac and Little Cayman are surrounded by coral reefs, and they are all peaks of a one-upon-a-time completely submerged mountain range on which corals began to attach themselves. That is why the islands chiefly consists of limestone.

The largest of the three islands is the 197 square kilometre Grand Cayman, and this is where you find George Town where the Caymanian government is located. George Town is also the heart of Cayman Islands’ financial service industry.

Beautiful corals and a rich fauna. Many small fishes live here, and they attract larger predators. Interesting overhangs to explore.

This dive can be done as a beach dive.

The wall starts at a depth of 8 metres and continue way down. The wall is covered in many different corals and sponges, including orange elephant ear sponges.

This dive spot is not far from Little Cayman.

This wall is connected to Bloody Bay Wall, but starts 6 metres below the surface. The wall is covered in a lot of sponges, including yellow, red and purple ones.

Wilderness Wall, famous for its healthy corals, is found south of Cayman Brac. A large pinnacle is located near the wall. 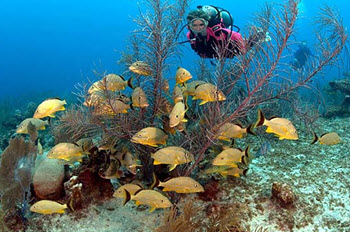 Babylon is a large pinnacle near North Wall.

The North Wall starts 12 metres below the surface.

This dive site is found near Grand Cayman.

This is the place to go if you want to see stingrays. Divers began feeding stingrays here in the 1980s and these clever animals soon learned to come swimming to Stingray City as soon as they heard the sound of a diver’s motor boat.

This is a shallow dive.

This ship was intentionally sunk here in 1996 to provide a home for marine life. MV Captain Keith Tibbetts is a 100 metre long Russian war ship.

This ship was intentionally sunk outside Seven Mile Beach in 2011 to provide a home for marine life. USS Kittiwake rests at a sandy bottom, roughly 17 metres below the surface.