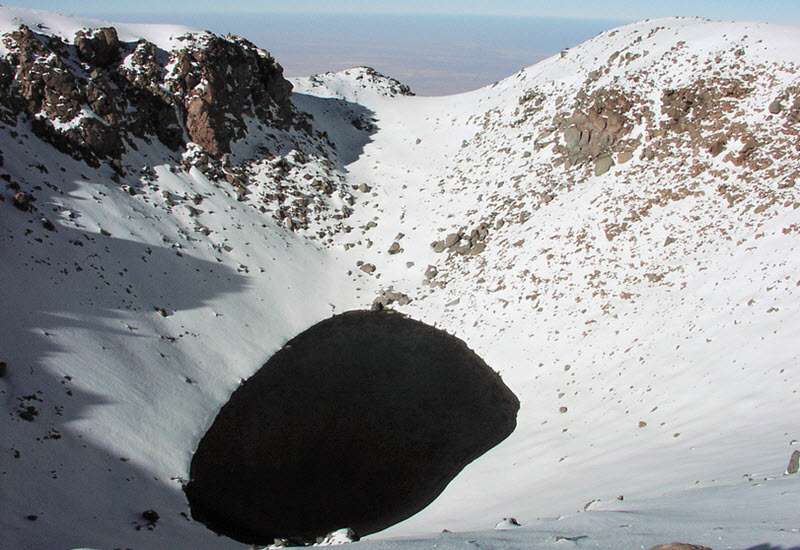 Laguna de Licancabur is a small high-altitude crater lake in the Andes. At an altitude of 5 900 metres above sea level, it is one of the highest lakes in the whole world. The elliptical lake is just 85 metres long and contains no fish, but very small organisms, including zooplankton, lives in it.

Laguna de Licancabur is located 90 metres beneath the crater rim of the Licancabur volcano, and the depth of the lake varies from roughly 3 metres to 1.5 metres. The lake is fed by snowfall.

The volcano Licancabur is located in the Andes, with the lower two-thirds of the north-eastern side belonging to Bolivia while the rest – including Laguna de Licancabur – is within the Chilean territory. This very sparsely populated region is dominated by the large salt desert Salar de Atacama. The highest point of the volcano is 5 920 metres above sea level.

The name Licancabur comes from the language of the Kunza people. Lican means people and cabur means mountain.

Exactly when the last major eruption took place is unknown, but evidence indicate that it was probably at least 500 years ago.

A group of divers lead by Johan Reinhard from the San Diego Sea World Research Institute broke the old record for scuba diving at the highest altitude when they did several dives in Licanbur on 14-17 November, 1982.

Reinhard had already been visiting the lake twice in 1980. His very first visit was during a work trip for the National Geographic Society where his job was to look for places that might have been sacred to the Inca. Since the lake was frozen when Reinhard arrived in April, he returned during the summer and did several free dives in the lake. Due to the low oxygen content in the air, it was really difficult for him to reach the bottom, despite the lake being so shallow and Reinhard normally being able to free dive down to 15 metres. He therefore resolved to return again – with scuba diving gear.

In November 1982, Reinhard and four other people made a total of three trips to the volcano rim from the base camp at 1500 metres. In addition to scuba diving gear, they brought a rubber boat and a metal detector. All in all, they made eleven scuba dives without finding any archaeological remains in the lake. What they did find however was a species of zoo plankton previously unknown to science.