A dream for many naturalist and regular divers is to dive with sharks. We fear and admire these elegant creatures that fascinates us to the degree that discovery channel devote entire weeks to them. It is possible to dive with some shark species with very little preparation and it is not uncommon to see small reef and cat sharks when diving on and off reefs in tropical areas. Other sharks takes a lot more preparation to see and dive with. To see sharks such as the Great White, Hammerhead, Basking Shark or Whale shark you might have to devote an entire trip to it. Other sharks such as the bull sharks are common in waters all around the world but it might still be best to be well prepared if you want to see them as they can be dangerous to divers and swimmers. Shark watching can easily become a live long obsession and you can spend a lifetime chasing a glimpse of rarely seen shark such as the Trasher, Greenland and Goblin Shark. Several scuba diving organizations including PADI offers courses especially designed to prepare you to dive with sharks.

In this article you will get some tips on how to prepare and where to go if you want to see different species of sharks. 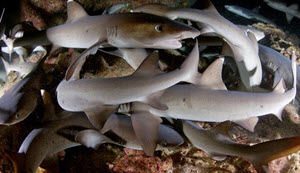 diving you are likely to see reef sharks sooner or later whether you look for them or not. Reef sharks can be seen on tropical reefs all over the world. You are especially likely to see them if you dive at night since they hunt mainly at night. If you want to be nearly guaranteed to see reef sharks, and many other shark species, you should consider visiting Cocos Island. Cocos island is a small group of islands located in the Pacific ocean. The islands are a part of Costa Rica and access is severely restricted. The “only” way to go there is to go with one of the research vessels that have access to Cocos Island and offer a limited number of rooms to tourists to raise money for the research. Most trips last one or two weeks. The prices vary depending on the season but you should expect to pay at least GBP3000/ USD5000 to go to Cocos Island. This price does not include your trip to Costa Rica. It is an expensive trip but it is an experience of a life time. The wild life is like nothing you ever seen before and after just a few days you will stop noticing reef sharks and other very common species focusing more on large rays, hammerhead sharks and other even more spectacular species.

The Tiger shark is a very large shark that is found primarily in tropical and subtropical waters. The species is known to eat almost anything including inedible man made objects They are sometimes referred to as “Garbage sharks” or “garbage eaters”. All types of objects have been found in tiger sharks. This species can be very aggressive and may attack divers. The use of a shark cage is highly recommended if you want to study this species.

Some of the best places to go if you want see this species include the northern coast of Australia and Islands in the Pacific Ocean. They can also commonly be seen in the Caribbean ocean. 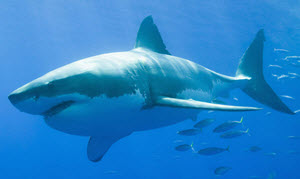 The great white shark is the ultimate shark for many. It is a magnificent hunter that is known to eat or at least take a bit out of humans. Their reputation as man eaters is however very exaggerate. They do attack humans but almost all cases seems to be cases of miss identification where the shark mistakes a swimmer or surfer for a seal or turtle. The simply truth is that we do not taste very good to the great white shark. This does however not mean that they can’t hurt you and you should always use a shark cage when diving with great white sharks. The great white shark is unlike other large sharks found in both tropical and colder waters. They are normally not found in British waters but can on occasion wander further north than normal.

The great white shark can be spotted all over the world and there are plenty of places where you can go on great white shark safaris. The best place by far for us in the UK to see Great White Sharks is in South Africa of the cape of good hope. Here you can find a number of dive operators that offer great white shark tours and no where on the planet is your odds of seeing a great white shark any bigger. We recommend that you plan your trip to coincide with the great Sardine Run. Another incredible spectacle that is unlike anything else and that gives you a chance to see countless marine species.

Whale sharks are the biggest fish on the planet. They are plankton feeders and can therefore easily be spotted on the surface as they trawl for food. They are found in tropical seas all over the world. 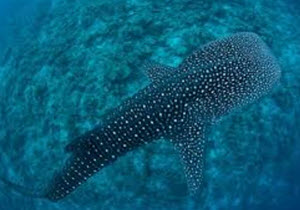 Whale sharks are one of the most majestic species you can dive with. They can grow to be very large and the largest recorded specimen was 12.65 m (41.50 ft). When you dive with them they often seem near oblivious of the divers. You can swim with whale sharks in many places around the world. The best place to see them varies with the seasons as they migrate to the areas where the supply of plankton is the greatest.

One of the best places to go to see whale sharks is the pacific coast of Belize, Honduras and Costa Rica. If you go there during the European fall you have a very good chances of seeing them. Hotel and tour prices in Central America is often very good. Costa Rica is a little bit more expensive than the other two countries mentioned. Honduras is often mentioned as a dangerous place to visit these days but the Caribbean islands such as Roatan remain safe and isolated from the problems on the mainland.

Another good place to see whale sharks is of the coast of India and Goa.

If you want to see a Whale shark but don’t have the money for a tropical vacation you might want to try to spot and dive with a basking shark of the British or Scottish coast. The Basking shark is another very large filter feeding shark and is many ways similar to the Whale Shark. The basking shark is found in colder waters and can be found of the coasts of Great Britain every summer. 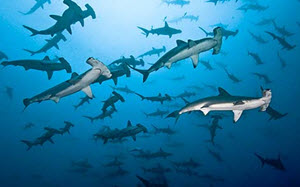 Hammerhead sharks can be found world wide in warm oceans. They are mainly found in coastal waters and around the continental shelves. The best places to see them depends on where you live. One of the best places for us here in Great Britain is around Bahamas and the Florida Keys. You can usually find a cheap flight and the flight is not too long. You can see Hammerhead Sharks in the Mediterranean ocean but it is much harder than it is around Florida. Hammerhead sharks are known to visit shallow lagoons in this area to give birth to their young in an environment where the young will be safer than they would be on the reef or in the open water. Breeding grounds like these lies scattered around the world. Another very good place to see Hammerhead Sharks is Cocos islands ( described above). It is not unusual to see several hundred hammerhead sharks at the same time when diving at Cocos islands. The picture above is from Cocos Island.

Dive with sharks in marine parks

If you don’t have a scuba diving certificate or if you are unable to travel for one reason or another you might still be able to get up close and personal with sharks. Many marine parks offer visitors to dive with their sharks in their shark tanks. It is not the same as diving with sharks in the ocean but it is the next best things. Most marine park only allow a limited number of people to dive with their sharks each day so if you want to be sure to be able to dive with the sharks a certain day it is best to reserve your experience ahead of time. Diving in a marine park is completely safe and they will teach you everything you need to know regardless of whether you have dived before or not. Diving in a marine park also guarantees that you see sharks and allow you to see a larger selection of sharks than  you might see on one day in the wild. You are never guaranteed to see sharks on a certain day in the wild. Diving in the shark tank at a marine aquarium is not cheap but it is still a lot cheaper than going on a diving trip.

One aquarium that offer you to dive with sharks is the Monterey Bay Aquarium in California but there are aquariums closer to home that offer the same experience.