Tropical reefs all over the world are filled with stunning fish species. Some groups of fish do however stand out even on the reef. These fishes are worth looking for on the reef. Many of these species are easy to spot while others can be easy to miss due their behavior or small size. I recommend looking for them whenever you dive on a reef since you are likely to see different members of the groups in different locations. 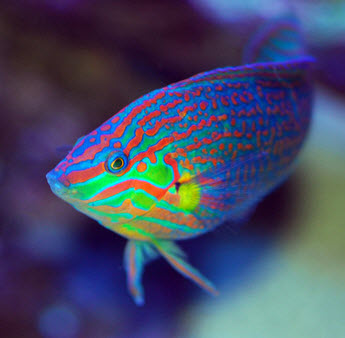 Wrasses is a group of very colorfully fish species belonging to a number of different genera. There are several types of Wrasses such as Flame wrasses, Fairy Wrasses and Flasher Wrasses. The male wrasses are often incredible stunning while the female are less flamboyant. The most commonly known and recognized wrasse species is the very large Napoleon Wrasse that you can see on many tropical reefs across the world. Most wrasse species are a lot smaller and harder to spot. Wrasses are usually found close to the reef darting in and out between rocks and crevices. 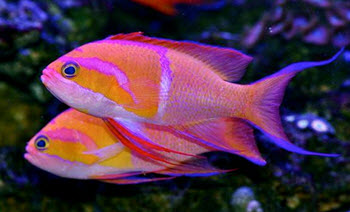 Anthias are very colorful fish that is seen in big groups on the reef. A lot of the small red, yellow, orange and pink fish that you see on reefs are anthias species. They life in complex social structures. The structures depends on the rank of the individual fish and the number of male and females in the group. They mainly eat small zooplankton. They can be found on tropical reefs all over the world. Anthias species are very easy to spot. They are often found near large corals near the top of the reef. Almost all divers see these fish but very few take the time to really observe them. I recommend that you take some time to watch them, the different brightness in the coloration of fish of different rank and their behavior. If you do you often spot specimens of other species hidden among the other. They use the school of anthias as cover to avoid predators.

Clown fish are most known from the movie finding Nemo and when most people think about clown fish they think about the Nemo clownfish, the occularis clownfish. There are however a number of different clownfish species with different colors and patters to be seen out there. Some are bright red while others are black and white. The clownfish is worth looking for due to their bright coloration and fascinating behavior. Clownfish are mostly found in soft corals and anemone that offer them some protection against predators. You might have to get close to be able to spot the clownfish in the anemone. You can usually spot an occupied anemone from some distance by the charges the clownfish do to keep other fish away. 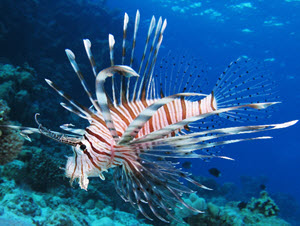 Lionfish are a stunning sight with their long fins and beautiful coloration. They can be seen in the Indo-Pacific region as well as in the Caribbean where they are a quickly expanding invasive species. There are a number of different species of lionfish. Each more spectacular than the rest. The easiest species to spot is the common and red lionfish. The red lionfish can grow very large.

Lionfish can often be spotted under overhangs or cruising close to the reef. They are only more seldom seen in open water. You also commonly see lionfish in wrecks and under docks. Lionfish are often easy to see without even getting wet. Just look under docks and you often see them near the supporting pillars.

Frogfish are colorful and fascinating fish. These fish remain perfectly camouflaged on the reef despite their often bright colors. These fish are predators that sits motionless on the bottom until a suitable prey come close. You almost never see these fish swimming. Instead they use their fins to walk around the reef. Their bright colors and elusive nature make these fish worth looking for. It feels like an accomplishment every time you successfully spot one.

Butterfly fishes are stunning fish species that are easily spotted. They swim in groups or pairs on the reef. They are flamboyant fish that seldom hide. If you pay them a little extra attention you will start to be able to tell  the different species a part. 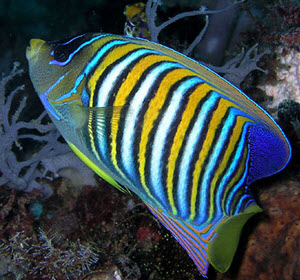 Angelfish is a large group of very colorful fish. They range in size from the very large emperor angelfish and very small species such as the flame and pygmy angelfish. Some species are easily spotted. Other are a lot harder to spot. The harder to spot species is usually darting around between rocks and corals on the reef. You need to pay extra attention to see them.