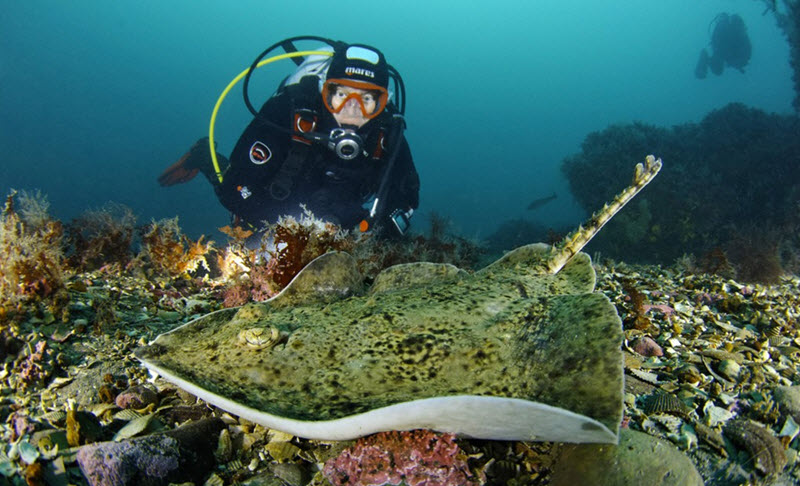 Iceland consists of one main island surrounded by several smaller islands and islets in the northern Atlantic. The region is very seismically active, with volcanic eruptions, earthquakes, geysers, and warm-water springs.

Iceland is located near the Arctic circle, but enjoys a comparatively warm climate thanks to warm ocean streams, especially the Gulf Stream and the Irminger stream.

The winters are cold and the summers are rainy. Generally speaking, the southern coast of the main island is warmer and windier than the northern coast, and also gets more rainfall and snowfall. The coldest part is the central inland.

The waters around Iceland are notoriously turbulent, with warm ocean currents from the south crashing into to cold ocean from Greenland and the Arctic. When this turbulence is combined with the forces of high and low tide, a special type of violent maelstroms called rastir can form off land protrusions. In Icelandic, rastir means voices.

As mentioned above, Iceland consists of one main island and several smaller ones. There is for instance Grimsey, the only part of Iceland located north of the polar circle. Here are a few other examples of islands that can provide interesting diving opportunities: 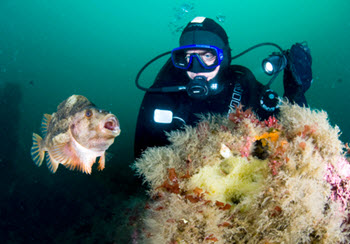 The southern coastline of the main island has hardly any fjords, since its comprised of a sandy flat formed by sediments deposited by rivers from Vatnajökull, the largest and most voluminous ice cap in Iceland. At the river mouths, you’ll find a special type of beach lakes called lón in Icelandic.

The rest of the coast is characterized by steep areas interspersed with flat areas. To the west, you’ll find the big bays Faxaflói and Breiðafjörður. There is also a big triangular peninsula named Vestfirðir, a name which simply means the western fjords.

Fjords such as Húnaflói, Skagafjörður are Eyjafjörður found on the northern side of the main island. This big bays Skjálfandi, Axarfjörður and Þistilfjörður are also located on this side, as well as the Melrakkaslétta and Langanes peninsulas.

The eastern coast have some fjords too, but they are comparatively small.

Þingvallavatn with the Silfra fissure

The water in Þingvallavatn typically stays around +3 degrees C year round. The water is exceptionally clean and clear, fed by melting snow from the Langjökull glacier. The melting snow doesn’t go directly to the lake, instead it is filtered trough porous subterranean lava rock for between 30 and 100 years before finally reaching the northern end of Þingvallavatn.

You can expect an underwater visibility of 75 metres or more. Fish are living in Þingvallavatn, but they tend to not venture very deep. Silfra goes down to a depth of 63 metres.

If you like Þingvallavatn, you will probably also like Nesgjá, another lake with crystal clear water. Nesgjá is located where the two continental plates meet, and the lake was formed by earthquakes causing a crack. Nesgjá is home to Arctic char (Salvelinus alpinus).

You can get from Reykjavik to the lake Kleifarvatn within half an hour by car, making it a convenient dive site for anyone based in the capital city. The lake is home to a big crater that releases warm gas into the water. When the gas is pressed through the crater at the bottom of the lake, it causes very noticeable vibrations. Diving among these vibrations is a very special experience.

At one side of Kleifarvatn, there are warm underwater springs located fairly close to shore.

Garður is a biodiverse diving spot where over 40 different identified marine algae grows. It is commonly described as an “underwater garden”. The algae – especially the kelp – attracts a lot of fish.

Garður isn’t very far from Reykjavik, you can get their within an hour or so by car.

Litlaá is a small and fairly shallow river where the bottom is covered in volcano sand and colourful sediments. Due to geothermic activity, the water temperature is 17 degrees C!

This is a hot spring found in the fjord Eyjafjörður; Iceland’s longest fjord. (The fjord is 60 km long.) The hot spring opening is located approximately 70 km below the surface. The water released is mineral rich freshwater. As soon as the freshwater hits the saltwater of the fjord, some of the minerals coagulate. Over time, coagulated minerals have build a 55 metre tall “chimney”. The top of the chimney is found roughly 15 metres below the surface.

If you are interested in chimneys, you should also check out nearby Lilla Strýtan, where several smaller mineral chimneys have formed around an underwater hill.

N.B! The current in the fjord is very strong.

El Grillo is an old 150 metre long British oil tanker. On February 10, 1944, it was sunk by Nazi air planes. You can explore this wreck in the fjord near Seyðisfjörður in eastern Iceland. The depth varies between 28 meters and 45 metres below the surface, depending on which part of the wreck you wish to see.

In 2002, the remaining oil was pumped out of El Grillo to prevent leakage.

If you go diving in the Vestmannaeyjar archipelago, you are very likely to get to see Atlantic puffins dive into the water hunting for fish. This archipelago is located to the south of Iceland’s main island, and consists of a dozen islands. Only Heimaey (Home Island) have year round residents.

In the 1960s, the Vestmannaeyjar archipelago got a new island due to underwater eruptions. The island was named Surtséy.